Posted on January 2, 2012 by 2cooksinthekitchen 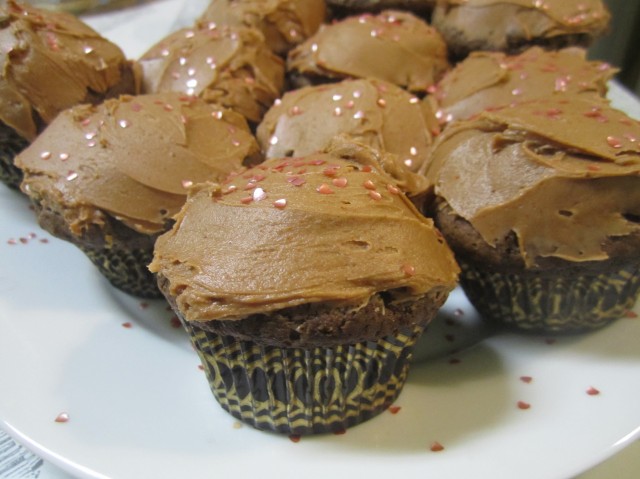 Happy new year everyone! Of course we celebrated in true 2 Cooks style with a big party with lots of food. Since I made Billey and Lydia’s wedding cake this fall I have developed a new baking obsession: custom cupcakes. For new years I made peanut butter cupcakes with chocolate bourbon frosting, delicious! I think I really got into the custom cupcake mood because a few weeks prior, in early December, I got word that my friend S.G. was having a potluck for her 30th birthday a custom cake was the first thing  that came to mind. I don’t know about all of you, but I never want to make my own birthday cake. If someone doesn’t offer to bring a cake to the annual birthday potluck I co-host with my best friend, we don’t have a cake. It may sound like we are being divas, but I feel like a cake is an important gift and more effort than I want to go through on my birthday.

S.G. gave me a clear cake wishlist: chocolate, chili, lavender, and lemon. Taken together in one cake these ingredients sound less than harmonious. So I asked her, “Would you be disappointed if you had cupcakes? Perhaps two different kinds?” Fortunately, she said she would not be disappointed by cupcakes. Which leaves me to wonder, am I the only person in the world who is worried someone will be disappointed by the offer of birthday cupcakes?

The first idea sounded straightforward enough: chocolate with chilies, which is now classic foodie combination. After some internet searching an idea appeared: how about chocolate, cinnamon and chilies? Like a Mexican hot chocolate?

The second idea I had to let steep a little bit longer. In searching for lemon cake recipes in cookbooks and online I realized how difficult it is to come across a good, classic lemon cake recipe. The kind you may have made with your Mom when you were a kid. Of course, fortunately for me my Mom still has the Betty Crocker cookbook we used to make cakes when I was a kid, but that book is not here in NYC. So I shifted by focus to the lavender. I thought it’s subtle flavor would get lost in the cake, so focused on the frosting. Fortunately, I found many ideas for lavender frosting online and also got a great idea for the cupcakes: how about lemon cake made with creme fraiche with lavender frosting? It’s like Provence in a cake!

These cupcakes were also an excuse to what is quickly becoming my favorite store: NY Cake and Baking Company to pick up some more Valrhona chocolate and edible glitter. At the party the cupcakes were a clear success and the extras also got a warm reception at work the next day. As as you know, my co-workers are excellent cake testers. 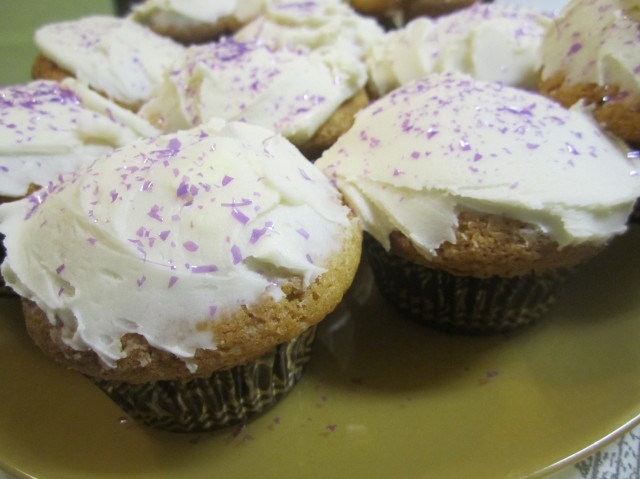 I altered a traditional lemon cake recipe I found on Epicurious, but used a half cup of creme fraiche instead of milk and added the zest of one lemon as well.

I was inspired by a recipe on Tasty Kitchen, though I omitted the food coloring and had dried lavender flowers without the stems, so I just used about 3 tablespoons of the dried flowers. 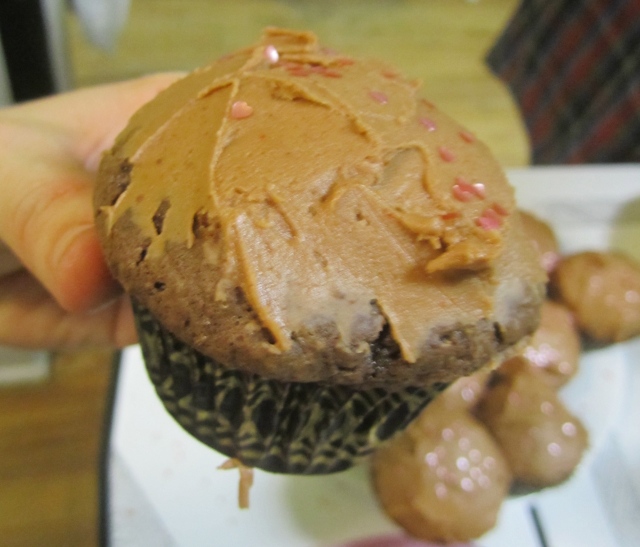 I was a little crunched for time, so I used the sour cream chocolate cake recipe I used for Lydia and Billey’s wedding cake, since I knew it would stand up to exacting taste tests. I simply added 2 generous teaspoons of cinnamon to it.

In a sauce pan over a medium-low flame melt the chocolate, stirring with a rubber spatula. Once the chocolate is melted, stir in the milk until combined. Let cool. In a food processor or with an electric mixer cream the sugar and butter and then add in the chocolate milk, vanilla, cinnamon, chili powder and cayenne pepper. Taste and adjust spices if necessary. If the frosting is too liquid add more confectioners sugar.

Let your cupcakes cool before you frost and enjoy! I’d love to know, what are some of your favorite cupcake/frosting flavor combinations? 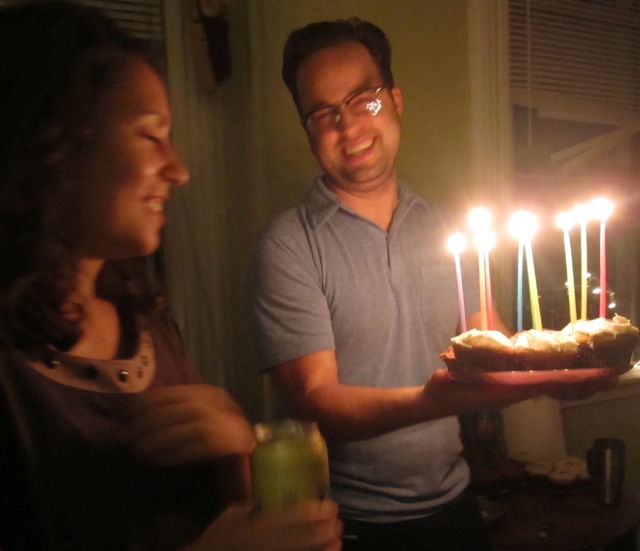 S.G. and her birthday cupcakes (served by M.G.)

We also participated in a link party on this fun blog:

Two cooks, one from Bushwick and a passionate meat-eater, one from Sunset Park and a former vegan, and both NYC transplants, set out to share original recipes that can be made dairy free and vegan deserts; showcase culinary resources in the outer boroughs (and sometimes Manhattan) where one can find unique, specific and fairly priced ingredients; and participate wholeheartedly in the many cultures of cooking and eating that make up New York City.
View all posts by 2cooksinthekitchen →
This entry was posted in Baking, Dessert, Recipe and tagged Birthday, Chili, Chocolate, Cinnamon, Creme Fraiche, cupcake, Dessert, Frosting, Icing, Lavender, Lemon, Recipe. Bookmark the permalink.